Was Steinbeck’s ‘Travels With Charley’ a fraud? 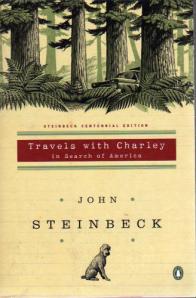 That’s the surprising thesis of this article from Reason that raises some serious questions about the artistic integrity of one of America’s greatest writers.

The author, Bill Stiegerwald, doesn’t say John Steinbeck never went on the 1960 cross-country road trip he documented in Travels With Charley in Search of America. Instead, Stiegerwald asserts that Steinbeck fabricated much of what happened on that 11-week journey from New York to California and back. An excerpt:

From what I can gather, Steinbeck didn’t fictionalize in the guise of nonfiction because he wanted to mislead readers or grind some political point. He was desperate. He had a book to make up about a failed road trip, and he had taken virtually no notes.

Stiegerwald is blogging about his experiences retracing Steinbeck’s steps at Travels Without Charley. Check it out.

This entry was posted in Uncategorized and tagged Books, Culture, John Steinbeck, Journalism. Bookmark the permalink.