My wife, the soon-to-be-famous author

This is a post about branching out and trying new things with the written word. But it’s not about your blog host.

It’s about my wife.

Jacqui, like me, is a copy editor. But unlike me, she’s a talented, hard-working writer who is slowly starting to make a name for herself.

Over the past couple of months, she’s had three pieces of short literature published in a Bay Area webzine, Doorknobs & Body Paint. Two of them appear in the August issue, which is a pretty cool accomplishment.

And now, for your reading pleasure, I present:

I’m so proud of you, honey. Now go write that best seller so we can quit our shaky jobs in a dying industry.

‘Before the First Pitch’

I love soaking up the atmosphere in a minor-league baseball stadium. I don’t even have to pay attention to what’s happening on the field; the real fun is people-watching, beer-drinking and hot-dog-eating on a soft summer night.

With that in mind, here’s a little video about the pregame preparations at McCormick Field in Asheville, N.C. , which is one of my favorite places on earth. (The city is pretty fantastic, too; I’ve been away a decade, and I still miss it.)

Elvis Presley, my mom and mortality

What’s the connection? This: 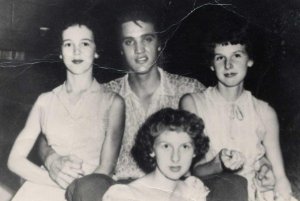 Patsy is the one on the left.

This photo of my mother with Elvis was snapped after a concert in Sheffield, Ala., in 1955 — a few months before the young singer from humble beginnings in Tupelo, Miss., would generate the kind of hysteria that would make a semi-intimate fan photo like this almost impossible.  Then, he was just a handsome up-and-comer who was part of a multi-act touring show. After the release of Heartbreak Hotel in early 1956, his world — and ours — changed forever.

As for Patsy,  the young student from humble beginnings in Haleyville, Ala., obviously didn’t achieve international fame, but she did become an award-winning educator and a wonderful mother. She was only a slight fan of Elvis’ music (I think we owned maybe two of his albums), but his death, falling on the day she crossed over to middle age, clearly affected her. She seemed more stunned than mournful, perhaps because the demise at 42 of the larger-than-life personality who once briefly clasped her hand was an intimate reminder that youth is fleeting, and death can arrive when we least expect it.

Sadly, my mother’s own death came far too early as well — 14 years later, at the age of 54. And unlike Elvis’, it wasn’t sudden; cancer, not an overdose, was the culprit.

These two disparate lives crossed paths just once. Fortunately for me and my family, that moment is memorialized in this photo.

It’s impossible for me to look at it without feeling wonder and sadness at the trajectory of both their lives, especially the woman who helped me become the man I am today.